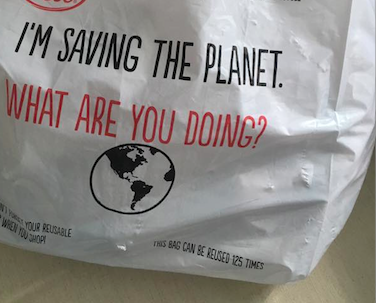 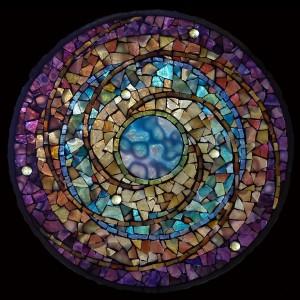 What am I doing? I’m going through Amy’s things. And I guess you’re the bag I’m not supposed to open but must be sure not to leave behind or throw away, her machine-gun instructions from the unit, over the phone, what the docs called pressured speech, don’t open it, Dad, and don’t even fucking think about throwing it away, it might look like garbage to you but that’s because you don’t get it, you never got it, I had to ride this goddamned genius train all by myself, feel the music all around and align my body to it like a tuning fork, Dad, do you even know what a fucking tuning fork is, Dad? Of course you don’t, because you don’t get it.

She was never a cusser.

‘It’s a work-in-progress, Dad, a model, I’m helping the structure perfect itself, capture the music, make it audible to everyone. And if you throw it away like everything else you’ve always dismissed and made fun of–‘

‘Shut up Dad! Shut the fuck up, Dad! You don’t get to talk! I’m giving you simple instructions.  You throw away that bag and that will be the end of us.  The end of Amy and Dad at the planetarium. No more music for us.’

So the work in progress, and boxes of books, sheaves of sheet music, clothes, sheets and towels, a giant pair of men’s basketball sneakers, a small pair of briefs that I tweeze from the floor like a dead animal. One man? Two? The guy she brought to our house for dinner once and spent the evening fondling, scratching his back under his shirt, murmuring in his ear as her mother and I sat and watched, our food cold lumps in our mouths?  There were a lot of them, when things got bad. It was how you knew they were getting bad. There was no stopping that either.

And you, bag, heavy, clanking like pirate’s loot and knotted tightly at the top, everything goes into the U-Haul, again, another failed flight for Amy, again, her third school in as many years, the meds make me fat and stupid, Dad, I’m meant for bigger things, I can’t fuck, I can’t sleep, I can’t wake up. I know how to balance this.

I read her a story once about Phaethon, the son of the sun, his father had made him a promise: ask me for anything and it is yours, swore on a sacred river. And he asked to drive his father’s chariot dawn to dusk across the sky. Myths were my music when I was a kid; I thought I might grow up to be a writer once (‘Now there’s a lucrative career path,’ my practical wife told me, not unkindly). The sun balked and begged his son, please don’t make me keep that promise, it is more than you can do, the horses are wild, but he had sworn on a sacred river, that is of course what a promise to a child must be, unbreakable,  and Phaethon was stubborn like kids always are, convinced he could control the uncontrollable and he took off and the horses sensed his tentative hold on the reins and went wild and the chariot tipped down toward the earth and set it alight, the fire spreading so quickly birds burned in the trees, then veered back up and just as fast it froze, charred branches locked up in layers of ice, the chariot’s axle snapping, Phaethon falling into the sea, slipping between the waves, and he was gone.

Oh, her baby-bird wings, no escape velocity, she peaked for a moment in the sky, pausing as if taking a breath of surprise–Jesus, how did I get up here–like one of the model rockets she made dozens upon dozens of once, her fingers peeling with hardened glue, gunpowder on the air, then turning nose down, plummeting to the ground.  Again.

I was old when she came, closing in on 50.  Her mother, too, 45.  An accident after we’d given up, a wish we no longer made. Was it that? That we’d stopped hoping? Was it faulty sperm? A stale old egg like a wrinkled pea? She was odd from the beginning, never cracked a smile. She never knew happy.

I am a parent.  Everything is my fault.

And here is the present moment again, life is a messy pile of them, I’m poised on it, weaving, like a drunken gymnast on a bar, the present only starts to make sense once it isn’t the present anymore. The past falling away behind me, her sweaty hand in mine, the future dim in front of me, will she come back this time? Will she ever have a nice house, the right meds, a couple of kids, a husband who maybe won’t be real warm but helps her stay on track, will always come to save her, kind of like me, who feels for her the kind of love he’s capable of feeling on his best days?   Will they have a piano? Will daily things replace her magic flights?

My knees ache as I bend to drag stuff out from under the bed, my neck twangs as I pull posters from the cinder-block walls, her roommate silent in the doorway, owl-eyed, who called the Student Health Center three days ago, got the hospital ball rolling. Again.

I think it burned her brain a little, each time. A smell came off her: carbon, model rockets. When she was a kid there wasn’t a name for it. Then, suddenly, there was.  And it turns out it did. Burn her brain, I mean. An electrical storm. The psychiatrist used those exact words.

She used to love explaining things. I’ve always been good at having things explained to me. I like to think she loved me for that. I’d take her to the zoo, the Natural History museum, the aquarium on the Sundays when her mom went for coffee and an afternoon with her journal, but she loved the planetarium the most. We’d sit in the soft movie-theater seats, a curved acoustic-tiled heaven within a heaven, pinpoints of light, a man’s deep voice-over edged with static, explaining, and she’d name the planets above us, trace their orbits.

The music came later, flowing out her fingers into white keys, stretched strings, padded hammers. I took out a little loan for the piano, the lessons, the expensive schools. She’d sit and watch the tuner work his magic, striking keys, adjusting wires, damping pedals.

I sit back on the floor for a minute, stretch the stiff out of my knees, look around at all the crap, don’t know where to begin. And you sit there, I look over at you again: ‘I’m saving the planet.’  As though you are inviting me with a weird plastic sympathy to look inside: maybe this will vindicate her. Maybe she really is on to something.  Maybe the third time’s a charm, where the crazy finally burns away to leave a bright star of brilliance. Maybe you really do hold magic, the mechanism she began to describe over the phone six weeks ago,

she’d never made anything before, this was new, an hysterical thread running through her voice, dead men whispering, Pythagoras, Kepler, the music of the spheres, hidden ratios, that unheard song, the cycles of the planets, the stringed instruments of bodies, one cannot hear nor align with the other, she’d found a way to do that, emptied her checking account buying the materials and the tools, was embarked on the design and construction of the tool that would make it possible, she ticked the list off during another phone call, this one at 3 a.m.: a jeweler’s drill, sheets of brass, a tiny saw, rubber hammer, watch springs, threaded screws that would pass through the eye of a needle.

Then the Health Center called, then the Dean. Then I got in the truck and drove to the hospital.  Then I stood outside the ancient spacecraft airlock doors of the unit, waited for the burly male nurse who’d greeted me twice before–a former Marine, maybe? his hair was so short, his crossed arms behind the chicken-wire glass as big around as my thighs, I looked like him once–to buzz me in, took that short instant alone to drop my head into my hands, feel my legs begin to go, feel the wail run through me, aligning me with that silent chord of the universe, escaping, my mouth shaping it into her name.

I don’t have room for any of this stuff anymore, her mother’s death only made the house smaller, I guess I’ll rent a locker. That way there’s a chance she’ll come get it, a chance she’ll come back to earth, heft the heavy lock in her palm, scroll in the combination, slide open the door. 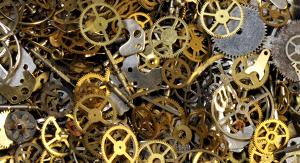 ss and up and into my lap, work the knot with my fingers, give up, tear you stem to stern. Tiny gears and crookedly sawn tiny lengths of brass, sharp enough to draw blood, and the tools, a miniature disaster, chaos in a bag, clashing, crashing notes. I gather them up in my hands, let them fall, and they jingle and ring with trapped music.

That is what I am doing.